Posted on October 6, 2015 by richandalice

…and drove, and drove. Today was a travel day, and we spent a total of 11 hours working our way from Fez to Erfoud, the gateway to the Sahara. The distance is about 260 miles, but we made some stops along the way, and at no point did the road resemble an interstate highway. We were in addition slightly slowed down by another one of our group falling ill and requiring a number of impromptu pit stops. Everyone takes this in stride, recognizing that it literally goes with the territory, and happily she is already feeling somewhat better. But the bottom line is, that there was not a whole of jam-packed activities today other than watching the scenery go by (which I will describe in a moment).

We headed due south towards the desert, our first geographical landmark being the Middle Atlas Mountains, which are only a few thousand feet high (they peak at about 5000′). That is more than enough to notice a significant change in climate, though: the air is much cooler and drier, and the hills forested with cedar and pine. Indeed, this region is rather incongruously referred to as the Switzerland of Morocco, a metaphor made even weirder by the fact that there is in fact a ski resort. They don’t get an enormous amount of snow, but it is apparently enough to ski on; we could see a couple of trails and lifts on the hillsides. It was in this area that we made our first rest stop/coffee break in the town of Ifrane, whose architecture, signage, and heavily German tourist population indeed suggest that we somehow stumbled through a wormhole into some bizarre Islamic corner of Bavaria.

Once we crossed the crest of the Middle Atlas, we were on a high plateau, the plain between the Middle Atlas and High Atlas Mountains; the Sahara is on the far side if the High Atlas. This plain is a rocky desert with scrub vegetation, the road mostly straight and way too narrow: a single skinny lane in both directions with no median strip, guardrails, or shoulders. It was clearly built in an era when this region had no traffic at all, but now that the Moroccan government is investing in a number of southern towns there is a steady two-directional flow of passenger cars, trucks, and buses like our own. The narrow highway and generally marginal road conditions make every oncoming encounter — and they are frequent — an opportunity for terror, as the clearance between northbound buses and our own is about 6″.

All in all the terrain closely resembles much of the American Southwest, albeit with more terrifying roads. However, the Southwest does not have nomadic tribes shepherding herds of sheep and goats across the rocky scrub. The nomads construct makeshift-looking compounds of varying permanence out of a wide variety of scrounged materials, and these constructions are visible on the hillsides every hour or so as we drive. We stopped at one, that you can see here. 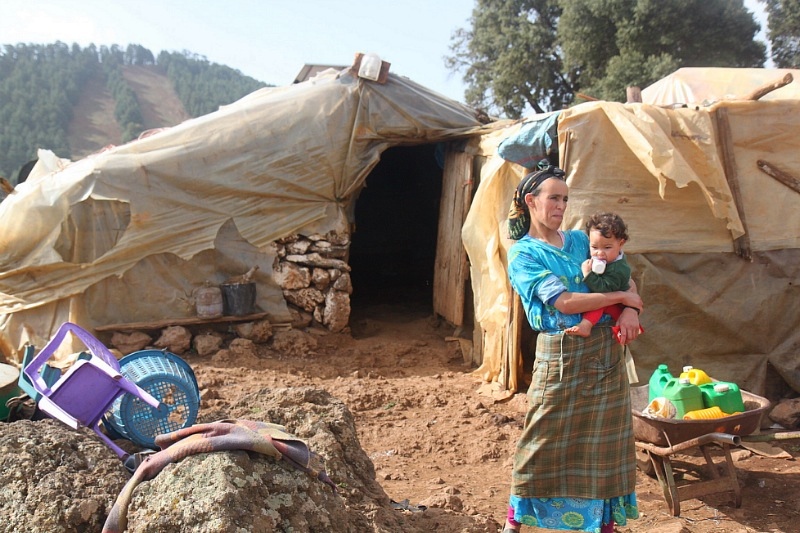 The ground surrounding the structures was rough with coarse grass and stones, and littered with animal bones. Dung beetles about 3/4 of an inch long wee all over, diligently rolling up balls of animal dung about the size of acorns and popping into their burrows when our footsteps alarmed them. The rocks were peppered with pretty little orange beetles with geometric hourglass patterns on their backs, looking like robot ladybugs.

The compound itself consisted of a few dimly lit rooms — they do have electricity, courtesy of a solar panel — adjacent to some corrugated metal paddocks variously holding turkey’s and sheep. Seven people live here, from two families; that’s one mother and child in the photo, and there was a grubby looking second child running around on his own. The families vacate this compound in the winter, leaving two of their number behind to keep squatters from occupying it. They return in the spring. They are illiterate, unwashed, and of low life expectancy: the woman above was 22 years old, looked about 40, and had been married since 13. But she baked a mean loaf of bread: she shared some with us that was still hot from the oven, and it was delicious.

Now here’s the strange part: completely belying this otherwise primitive existence is the fact that they have television. A modestly sized TV with one of those ubiquitous pirated cable boxes was fed by a small satellite dish and powered by the solar panel. They probably only have enough juice to operate the TV for a small part of the day, but sure enough, she turned its on for us and we could see the channel guide from the satellite (which she, of course, does not know how to read). But she also flipped through a couple of stations with some kind of soap opera going on, which kind of put a dent in my personal mental image of the isolated nomad.

We crossed the plain between the two mountain ranges and ascended into the High Atlas, where the road became twisty as we climbed and not any wider. There were at least guardrails, although frequently damaged or broken through by what we can only assume was some prior horrific accident. The terrain also became even more sparse, the soil turning redder and the vegetation becoming even more sparse. But there is enough water to be found in wells and the occasional shallow river to allow the construction of bricks and adobe, and the architecture in the towns by the road reflect this. Take a look at the image below: the town is made from adobe, and if you remove the tall structure at right, which is the town minaret, the scene could very well be somewhere in northern Arizona.

If you’re not altogether in agreement with that statement, then check out the next image and tell me that it couldn’t equally well be in Arizona or New Mexico.

What you will not find in Arizona or New Mexico, however, is groves of date palms like you see in the picture below. The trees sit in a strip of land a few hundreds yard wide in a valley below the winding road, and they follow it for miles. Dates are a major part of the economy here, and the are a number of varieties with a wide range of quality and corresponding price. At the top of the line are Medjool dates, which are quite expensive (and not the ones in this grove).

We arrived at our hotel in Erfoud at a little after 7 PM and upon entering it immediately felt like desert travelers encountering an oasis. Below is the courtyard. You can see the pool in the middle of the photo; what you cannot see is the white camel that they keep on the grounds. This place is nice, and will doubtless in retrospect stand in sharp contracts to the more primitive lodgings that we will have for the next couple of days. We head out into the Sahara for real tomorrow, leaving behind most of our luggage and abandoning our bus for several 4 x 4’s that will take us to our tented camp for the next two nights. There, we will be riding camels into the dunes, meeting desert Berber tribes, and — my astronomer self smiles — enjoying some truly spectacular night skies. What I will not be doing, however, is transmitting any blog posts for the next few days, as we will be well and truly off the grid. I hope to be back online with suitable Rich and Alice of Arabia stories in a few days.