I expect to have my laptop back — and thus be able to post my final Namibia entry — within a few days, but in the meantime I’ll leapfrog in time a little bit to our first post-Namibia destination. ( And you knew that had to be the title, right?)

If the aliens ever land and want to know where the Capital of the World is, you could make a pretty good case for pointing them to London. You might be able to make a stronger case for New York City in the past 80 years or so, but for a couple of hundred years prior to that it would have been a no-brainer for London. It’s stodgy, lively, vast, intimate, and generally schizophrenic all at once, with traditions and about one-third of its architecture rooted in the 11th century.  Another third of the buildings seem to have congealed some time in the 1940’s, and the rest looks it has been taking lessons from 22nd-century Japanese architects. 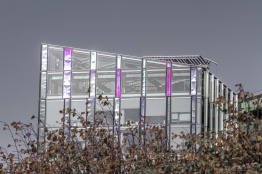 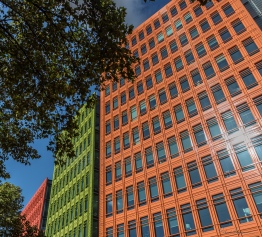 Of course, one of the more recent non-architectural traditions is Worrying About Brexit, probably for good reason. The most recent source of angst as I type this is a report that came out yesterday predicting that British farmers’ profits will be cut in half as a result of Brexit. This could put real pressure on the milk supplies to make the batter for fish and chips.

Our stay in London was a brief one: just about three days, much of which was spent looking up old friends. (And one new one. I have for some years been following the beautifully-written travel blog “Are We There Yet” written by Italian ex-pat Fabrizio S, living in London. We have been following each others’ blogs and corresponding by email for about two years and have finally met face to face!) But we managed to hit at least a few of the high spots: St Paul’s, the Tate Modern Gallery, and the changing of the guard at Buckingham Palace (viewed in person daily by over 45 billion people, most of them standing in front of me). So here are some obligatory London Tourist photos: 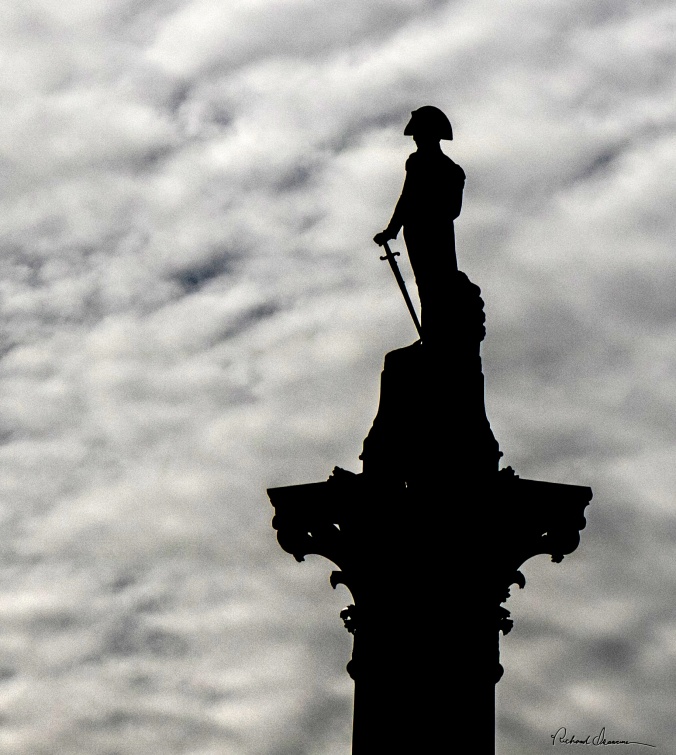 St Paul’s Cathedral,. Yes, we climbed to the Whispering Gallery. 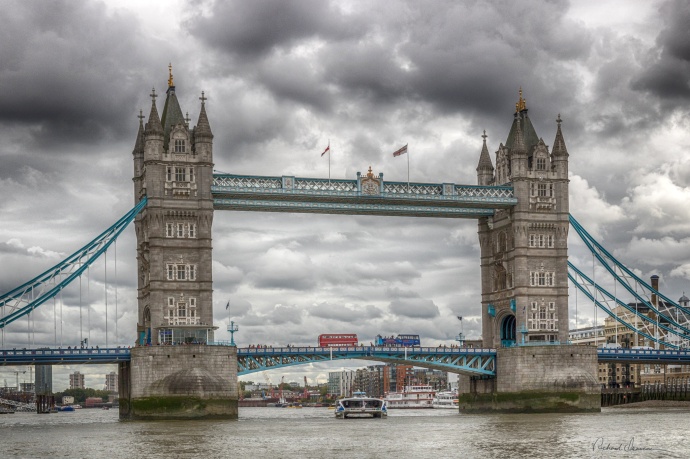 One of our go-to stops on this trip was the London Eye, the famous 450′ Ferris wheel built for the millennium celebrations in 1999. It’s a great sight in and of itself, fitting oddly but somehow comfortably into the local skyline, and of course affording a spectacular view of the city. 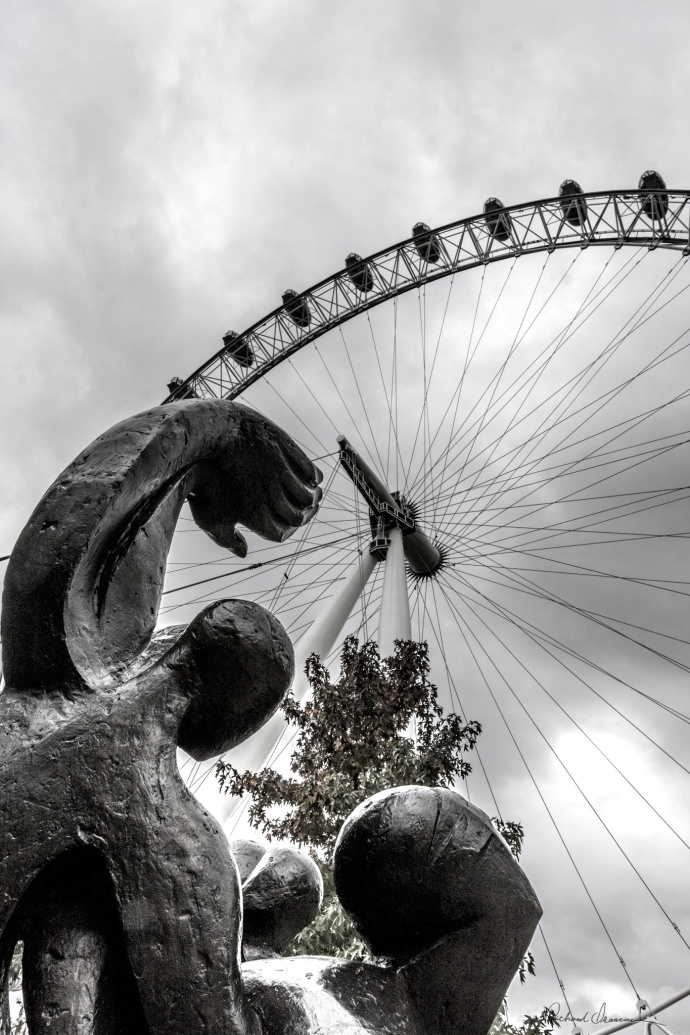 We arrived at 2:15 PM on a cloudy afternoon amidst an enormous throng of visitors, and were told by the automated kiosk that we could buy either a regular admission ticket for £26 or a so-called FastTrack ticket to jump part of the line for £36. Hmmm, tough call. How long would we have to wait? Well-ll-ll-ll, we were informed, with the Fastrack ticket we could get onto the Eye at 4:00, versus a plain-old cheaper regular ticket that would allow us on at….. 3:15 PM. I asked the nice uniformed attendant how this could be, and was told, “Well, so many people sign up for the FastTrack tickets that it makes the wait longer.” OK then.

The ride takes a half hour, during which time the wheel rotates only once. There are 32 ovoidal capsules (Alice was quite scandalized when I described them as suppository-shaped), each holding 25 people, which means that at any given moment 800 people are enjoying the view and peeking down into Parliament. 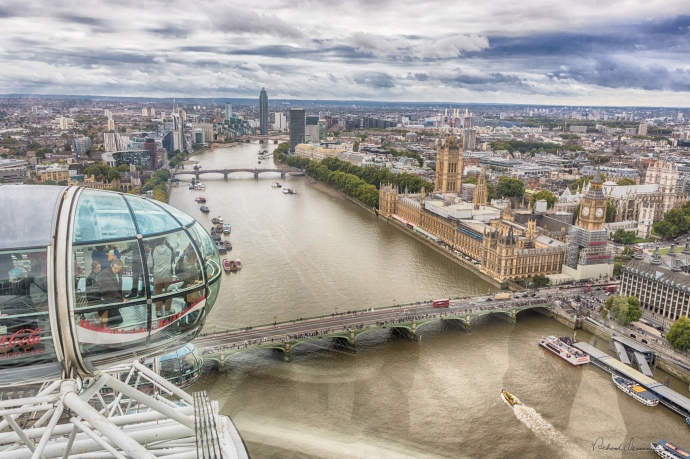 There is a lot that has changed in London in the decades since I last visited, most notably the ethnic mix, about which a lot of people angst, since “ethnic” in this context is a sort of code word for “Muslim”. I heard grim tales about areas where no Westerner or immodestly-dressed women dare to tread without getting glared out, and it is all rather overwrought.

It is certainly true that London has a far more diverse ethnic array than it did when I last visited, over 25 years ago. (The mayor is a Muslim, Sadiq Khan.) It is also true that there are areas that are heavily Muslim: there are blocks at a time when all of the store signage is in Arabic as well as English. But to us at least, the general feel of those areas is not a whole lot different — and no more threatening — then, say, Chinatown in San Francisco. There are certainly visibly many Muslims in traditional garb in the streets, but it by no means feels like an isolated enclave; there are lots of other ethnicities walking around as well, all looking quite unconcerned.

I suppose it is quite possible that women in particular might receive a lot of hostility for being seen as dressing too immodestly. But context is pretty important: I guarantee you that you’ll receive those same looks today by walking around in revealing clothes in the orthodox Jewish sections of the Williamsburg neighborhood of New York City. Ethnic mixes change, cities change, countries change, and in general I feel that the threat is more to our perceptions and self-image than anything else.

Of course one of the upsides to all this newfound diversity is….better food. English food has its reputation, of course — and completeness compels me to report that the aptly-named “Mushy Peas” is still a dish here — and it has long been the case that you were better off frequenting Indian Restaurants. But now there’s a lot of everything: Middle Eastern, of course, and even (to my amazement) the occasional taco truck. So things are looking up.

But a lot of the old charm is still there, even as ancient cathedrals nestle up against 50-story steel and glass extrusions. Our hotel was adjacent to St James Park with its long lake, country gardens, ice cream stands, and enormous diversity of waterfowl. 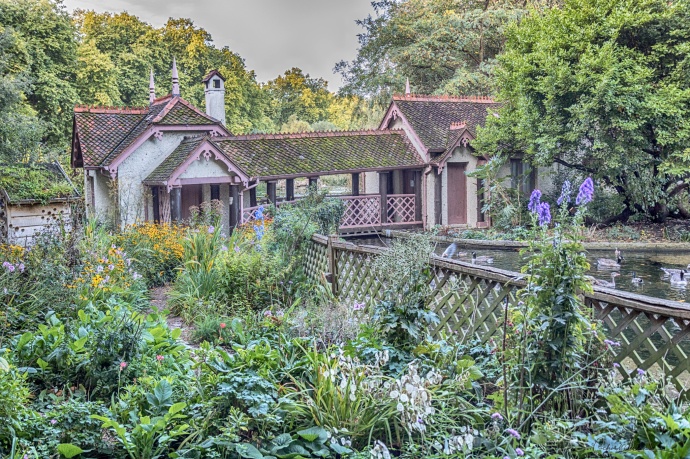 The Guard still marches, the weather is still rainy, and overall it was great to be back.

Underneath the Millennium Bridge