Posted on September 22, 2018 by richandalice

We walked around the city for 8 1/2 hours today, courtesy of our knowledgeable and unstoppable guide Martin, who showed us far more than I can possibly remember. So partly out of exhaustion and a desire to get to bed at a reasonable hour, I’ll let the photos do the talking today with less narrative than usual. Probably.

But first, the required dose of surrealism. You probably think this happy couple on the Charles Bridge has just been married: 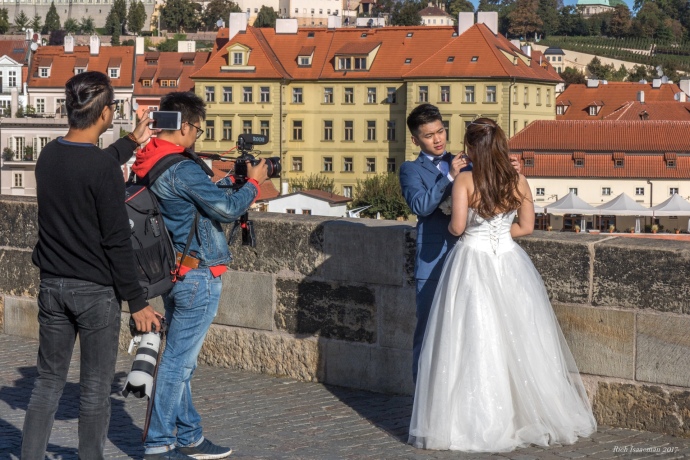 But you’d be wrong. Or more charitably, you’d be about 3/4 right. This couple is participating in a hot new trend in mainland China, in which (1) you and your spouse-to-be travel to a foreign destination with a photographer; (2) rent wedding outfits and have all your romantic wedding photos taken; (3) return to China and make a photo album to show to the family; and then, finally (4) get married in China. It’s kind of a destination pre-wedding without the guests. Or the wedding.  When China takes over the world there are a lot of things that are going to take some getting used to.

In case you’re wondering how I know all this, Martin has on occasion been hired as a photographer or a factotum to help rent the wedding outfits.

Weddings make me think of religion, so now it’s time for a good old fashioned dose of Central European antisemitism, in the form of this delightful statue, also on the Charles Bridge: 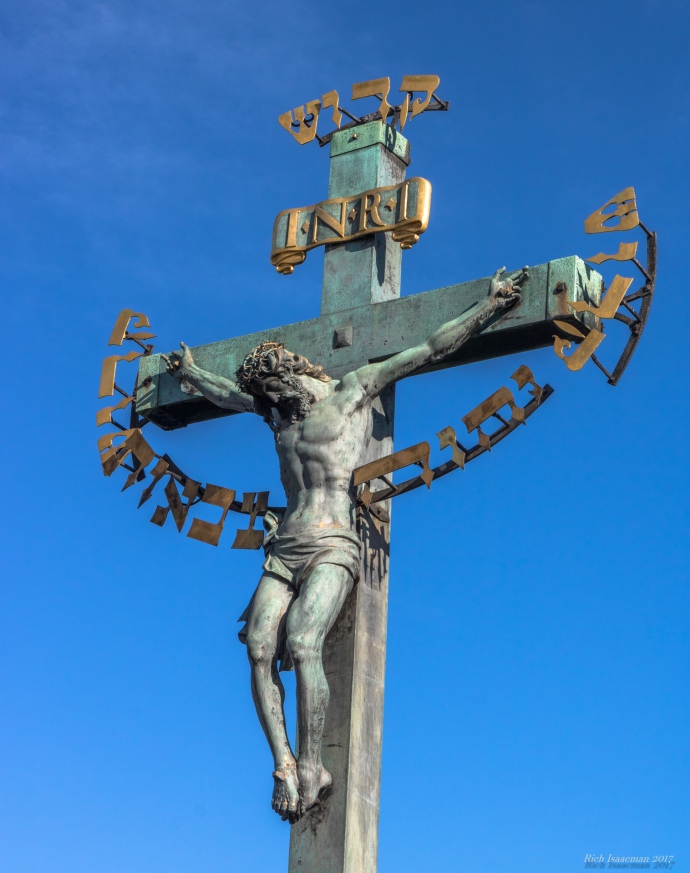 Yes, that’s Hebrew encircling Big JC, and not just any Hebrew: it is the Kaddish, one of Judaism’s most important prayers. How did this come about? Well, the cross — minus the Hebrew — was installed on the bridge in 1659. In 1696, a local wealthy Jewish merchant, one Elias Backoffen, was convicted of dissing Christianity by having been witnessed sporting a blasphemous facial expression. (Yes, really. It was pretty hard for Jews to avoid breaking the law.) He was fined a bunch of money and the local authorities decided to put the money towards humiliating all the Jews in the vicinity — always a popular move — by decorating the crucifix with their most sacred invocation. Classy.

It took a little over 300 years of enlightenment for the city fathers to figure out that in the 21st century the current population of Jews might find this just a wee bit offensive. But by virtue of having been there all this time, the statue had acquired some perceived historical significance, and so in the year 2000 a solution, such as it was, was put in place, in the form of a plaque at the base of the statue that basically says, “Yeah, we know this is offensive, but here’s the background….”

OK, on to the pictures so I can get to bed. First, a monument to Jan Palach, a student who immolated himself in protest of the Soviet repression of the Prague Spring in 1968. 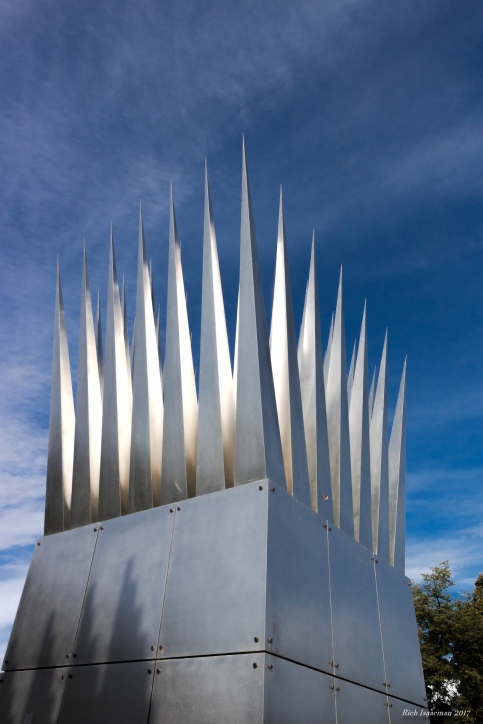 Next, a baroque garden — complete with white peacock — adjacent to the palace where the Czech Senate meets. 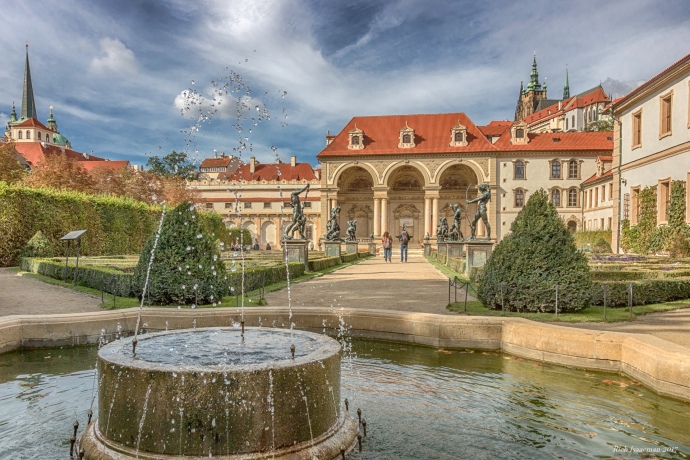 The garden also includes this weird black melty stuff, which is an art installation called the “Dripwall”.  It is actually a sculpture designed to look like a cave, that has assorted whimsical faces hidden in it. 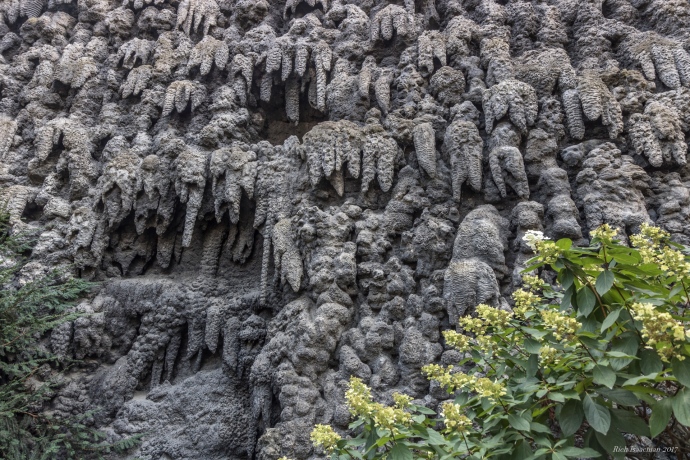 Now we move up the hillside in “Castle Town” on the east side of the river, working our way towards the Prague Castle. Our first stop is the Furstenburg Gardens and its sundial, on the hillside just below the Castle. 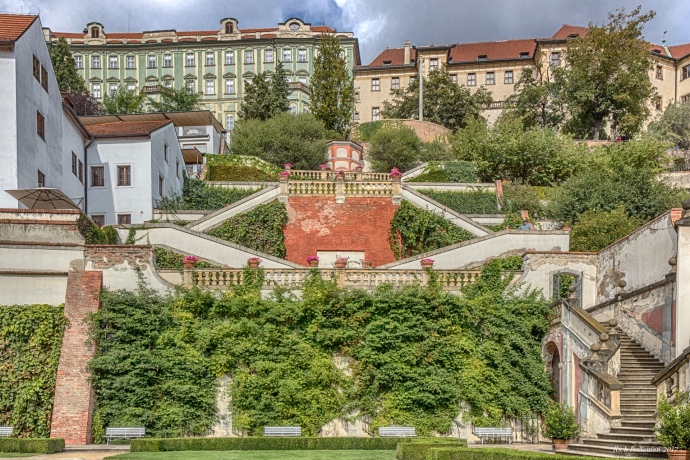 And now Prague Castle itself, a looming Gothic melange of architecture from about a half dozen different eras starting in the 10th century, whose centerpiece is St. Vitus Cathedral (makes you wanna dance!). First the enormous, terrifying outside: 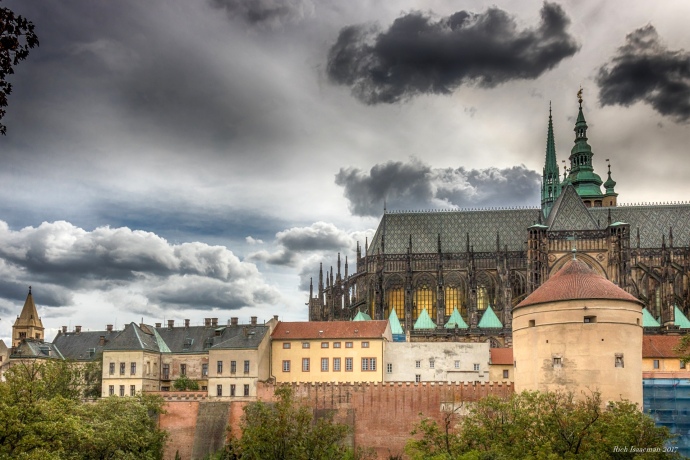 And now the interior of the cathedral. A lot of the stained glass is contemporary, designed in the 20th century: 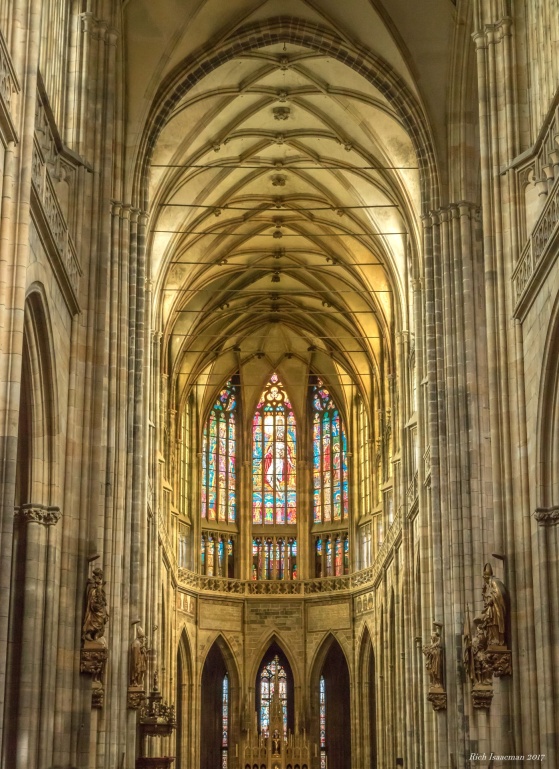 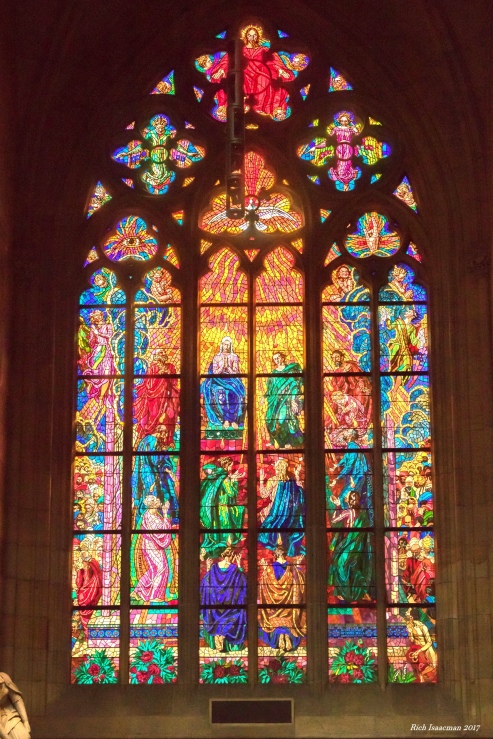 The locale affords us a view back towards the town to the east of us.

Our last stop of the day was the highlight: the Strahov Monastery. It has a truly glorious library that includes a wonderful collection of terrestrial and celestial globes, and the whole place belongs in a Harry Potter movie. We were extremely lucky to be with Martin, who is able to get authorization to go into the library itself, as opposed to viewing it from the doorway. We had to put on soft slippers to avoid damaging the floor, but we had the place to ourselves for about 45 minutes. Here is what we saw! 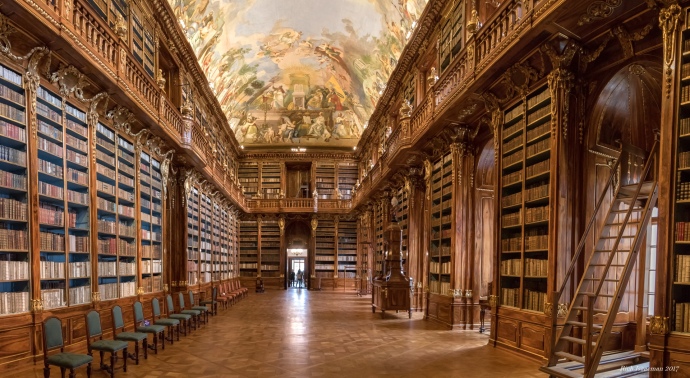 There’s even a hidden staircase behind a fake bookshelf, so you can sneak around and kill people. Or steal books. Or something. 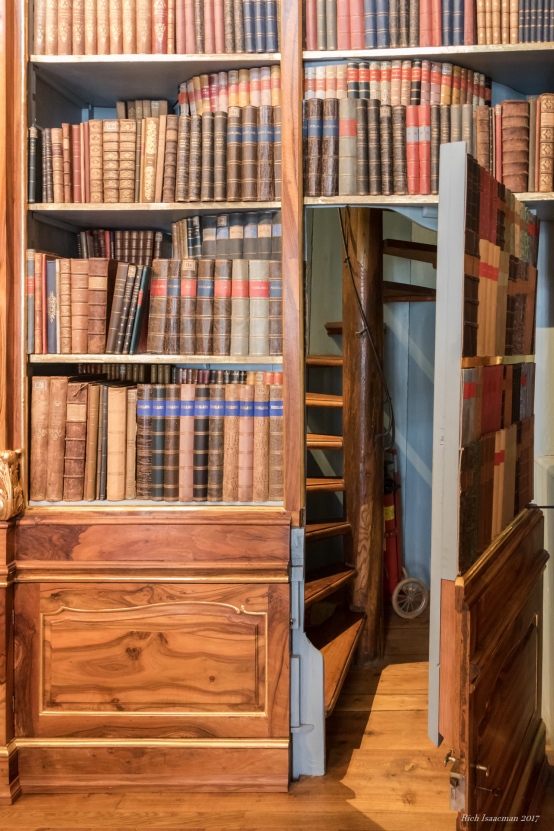 The library was the highlight of the day, and it was a very fine day. We’re exhausted. Tomorrow it is supposed to rain, so we will probably visit the National Gallery, which has a big photography exhibit going on.