Posted on September 10, 2018 by richandalice

Driving around in northern Iceland is a head-turning exercise in trying to take in first this volcanic feature, than that unnamed waterfall. The countryside is pretty isolated in the north, where the largest town, Akureyri, has a population of less than 19,000 which, amazingly, makes it the second largest city in Iceland after Reykjavik.

That Alaska-like low population density means that we needed to be mindful of our fuel tank, so we started the day by backtracking into Saudarkrokur for gas. While Tim and Alice coped with the one-pump street corner filling station, Janet and I walked down the block in search of a restroom, ultimately finding ourselves in the local bakery/tea room. It was there that we discovered that Icelanders are really excellent bakers with an inordinate fondness for pink icing. Seriously, everything they sold looked criminally mouth-watering, and half of it had pink icing. Wanting to blend in with the locals, I bought and ate a fresh doughnut with pink icing. It was as light as air and I’m sure contained at most zero calories. That’s how I know that they are excellent bakers.

The landscape in northern Iceland is oddly like Hawaii except for the large temperature difference and presence of sheep. It’s volcanic terrain dotted with cinder cones and the occasional serendipitous waterfall within a few hundred meters of the road. Here’s the first one we encountered, photographed by drone: 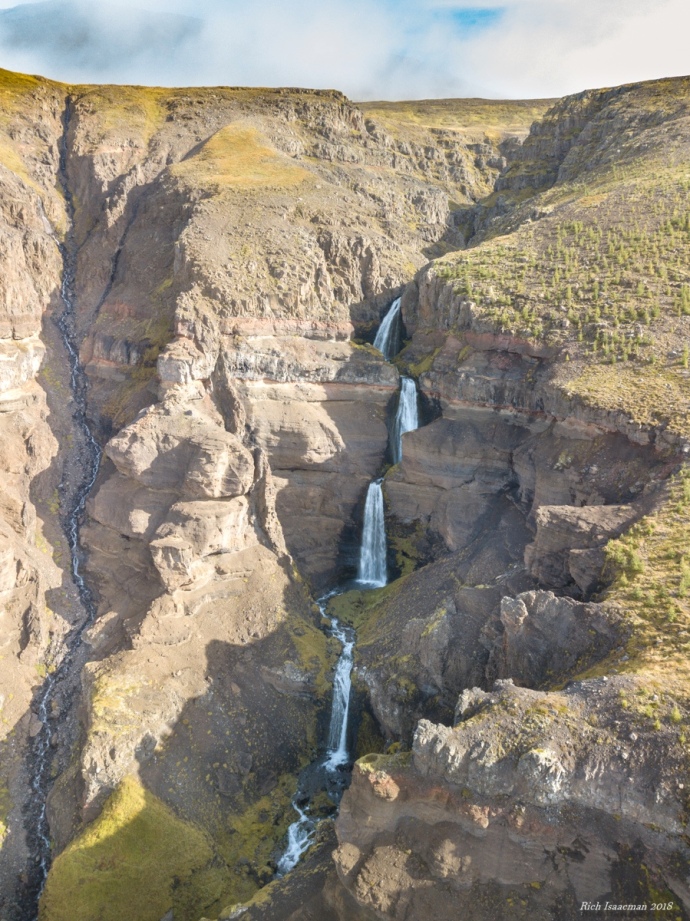 This is a pretty typical sight. In this case, we were still close to a fjord flowing northwestward, which at this time of year and this far inland was at a very low water level, creating this abstract scene as viewed from some 200 meters directly above.

I’m rather proud of this photo, but if you are having trouble visually parsing the scene, here it is again looking more upward towards the sea.

Swiveling the drone to look upstream towards the mountains (and the sun), the same river looks like this:

Such are the rewards of driving in northern Iceland. While I was flying the drone, Alice walked a quarter mile or so up the road, where we had passed a gravel lot packed with cars and trucks. Turns out that it was also packed with sheep: this was the venue where the various livestock owners identified their particular sheep via ear tags. The sheep all graze together, you see, and are herded together en masse and sorted by owner later.

We continued on our way and spotted a gravel spur and small parking lot at the head of a path leading down to a valley. A short walk down the path took us to a precipice overlooking a river with an oxbow bend around a steep basaltic hillside. Here are Alice and I defying death, about 15 meters above the valley floor on a somewhat precarious lookout point. We look a lot cheerier than we felt; the path was loose dirt and rock, slipperier than we’d like, and it was a long way down. 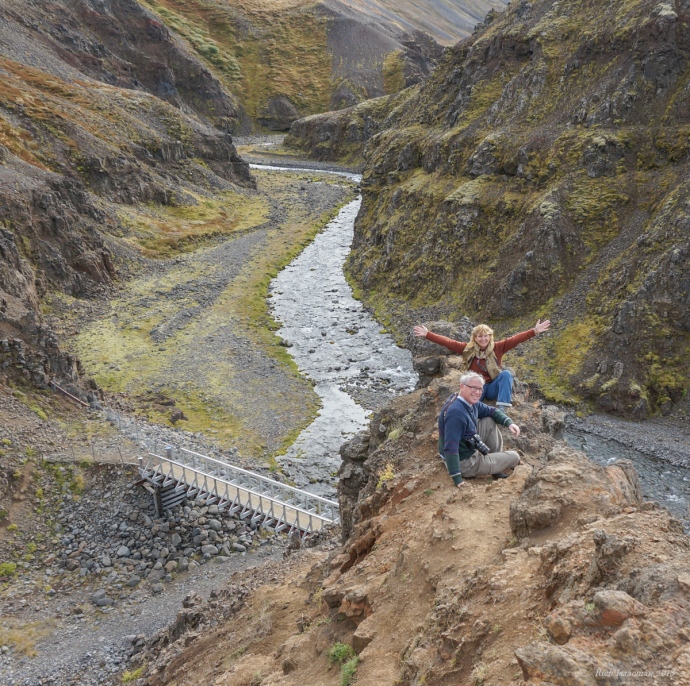 Our next destination was one of Iceland’s better-known waterfalls, the Goðafoss, which means “Waterfall of the Gods”. Like every stationary object in Iceland, this one has a legend associated with it. As the story goes, in the year 1000 a local chieftain named Þorgeir Ljósvetningagoði — his friends called him Bob — was taking a lot of political heat from the Norse, who had recently converted to Christianity from Paganism and wanted Iceland to do the same. Chief Bob had to make the big decision about which way to go, and since I am not typing this by candlelight you probably know the outcome. Deciding that Icelanders should become Christian, he demonstrated his commitment by throwing all of his statues of Pagan gods into this waterfall. Hence the name. (What history conceals from us is that that Bob went home and got an earful from Mrs. Ljósvetningagoði, who went out and bought a new set of idols at Pier One the next day.)

Anyway, here’s Goðafoss. The main cascade (there’s a smaller one a short way downstream) is about 12 meters (40′) high. The river above it is the Skjálfandafljót (pronounced “Snuffleupaguss”), which is the fourth longest river in Iceland. 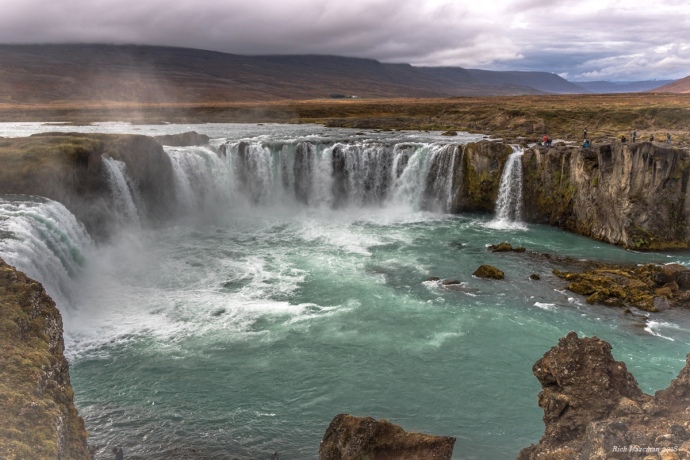 Our next stop — and our destination for the day — was Lake Mývatn, which means “Midge Lake” due to the ubiquitous dense swarms of the goddamn things. (They even got into our noses and mouths, and I can only imagine what it must be like in the summer. Thank God they don’t bite.) Mývatn is a popular tourist area because of all the geothermal activity: there are natural hot spring baths, nature trails through volcanic formations, and “resort farms” for lodging, including the one we are staying at. The lake itself is dotted with what appear to be mini-volcanoes, and sort of are. Here is the scene:

What they actually are, are “pseudocraters” (that’s their real name), essentially burst lava bubbles that formed when the original lava flow overran a marshy area. They’re also called “rootless cones” because despite their appearance they are not actually lava vents. Rather, the moisture in the swampy land under the then-hot lava flow boiled away and emitted steam from underneath the lava, swelling it into a bubble that hardened and later collapsed. It’s an odd, unearthly sight. Or at least I think it is, since the midges kept swarming around my head.

We finally came to rest at the Vogafjós Farm Resort. In case you are wondering what that means, it means that we have a very comfortable motel-like room, all wood paneled and with a super-comfy geothermally heated floor (!), and that there are cows outside. There is also an excellent farm-to-table restaurant, in this case the farm-to-table distance being zero. Their specialty is lamb — quite the best I have ever had — and “Geyser Bread”, which is a very moist dark rye bread baked by burying it in the hot ground near a geothermal vent. Yes, really. It’s great!