Posted on September 29, 2015 by richandalice

OK, OK, I might as well get this out of the way first and vaporize my Sophisticated Traveler credentials once and for all. Remember what I said about djellabas and sombreros being a thing? Here are Alice and me in an act of public self-humiliation:

Nope, we are DEFINITELY not tourists. Nothing to see here.

We will not speak of this again.  Moving right along….

You probably think of Morocco as an Arab country. You have a lot of company if you do, including the government of Morocco itself. But in fact the country is 70% Berber, a very loosely-defined and heterogeneous ethnic group that is not Arab and in fact views the Arabs as invaders…which they were, in about the 8th century. The Berbers came from just about everywhere in the hemisphere; some resemble dark sub-Saharan Africans, others lighter-skinned Europeans. There are even a smattering of Jews among them. (Though very few: practically all of the country’s 300,000 Jews left for Israel after its founding in 1948, and only about 3,000 remain. There are too few of them to even bother persecuting, unlike the Shia Muslims, which are somewhat second class citizens in this Sunni country.)

And by the way, do not call Berbers Berbers: their name for themselves is the Amazigh, or “free people”. The name “Berber”, in fact, is of unclear origin; one theory is that it is related to the word “barbarian”. They are not too crazy about this theory, as you might imagine.

We are in Chefchaouen right now, in the Rif mountains in the northern part of the country. This part of Morocco was long considered something of a backwater; King Hassan II, who ruled for about 50 years until his death in 1999, was very “south-centric” and an Islamic traditionalist. (The giant mosque in Casablanca whose pictures I posted yesterday is named after him. It holds 100,000 worshipers — that is not a typo — and has a 4000 car underground parking garage. I do not know if they validate.) His son and successor, Mohammed VI, as rather more westernized and very much the reformer. Politically, this northern part of the country now gets more attention; religiously, a wide variety of traditional Islamic strictures have been loosened, the mosques are turning out a cadre of more moderate imams, and women in particular have benefited from more educational opportunities and more balanced marriage and divorce laws. More on this topic later.

Chefchaouen (hard to get all those vowels in the right order) is a beautiful hillside town, the buildings variously blue or whitewashed, making it rather Greek in appearance, as you can see here:

We are staying in a beautiful restored traditional guest house called a riad. The floors are all tile, the rooms ringing a 3-story mezzanine onto a central skylit atrium. In the middle of the floor at the bottom, where the front desk is, overstuffed easy chairs ring a low copper and tile fountain. The front door opens onto the souk, the bubbly warren-like marketplace full of strolling tourists and insistent vendors. Leather, woodwork, clothing, and tchochkes are the order of the day, and the streets are all blue. We took an early morning stroll to see relatively people-free streets like these:

Here are a few locals of varying ages: 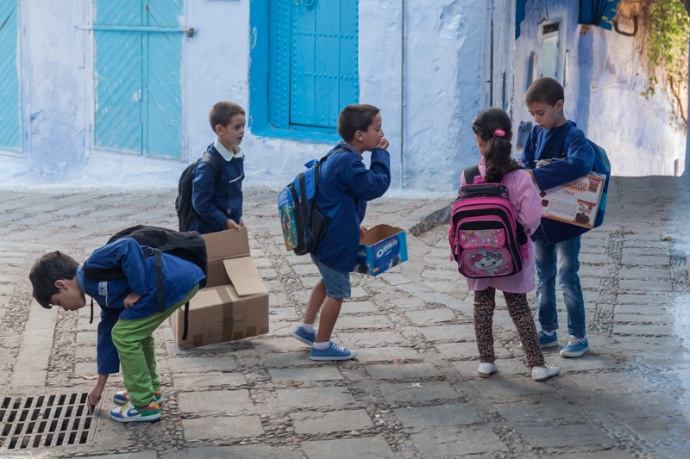 The souk takes on an otherwordly air at night, the street lights mixing with the blue walls, the vendors importuning the strollers through the maze of alleys, and the calls to prayer from the muezzin echoing from the minarets. Here are some night scenes (I may post more tomorrow):

That last photo is worshipers exiting a mosque after evening prayers. This particular mosque has some political significance, as it is in the vanguard of training and dispatching moderate imams to counter the spread of Islamic fundamentalism. (The term “fundamentalism” is somewhat misleading insofar as even most conservative Muslims consider the jihadists’ doctrines to be an extreme corruption of actual fundamental Islamic principles.)

After our morning stroll, we boarded our van and drove about a half hour into the mountainous countryside to have our first home-hosted meal. Our hosts were Mohammed (not the same Mohammad as our tour lead) and his sister Fatima; his wife was laid up in bed with a difficult pregnancy. They are a mixed Berber/Arab couple who operate a small farm/guesthouse, and upon our arrival put the women in our group to work helping Fatima prepare the meal. This included making the flatbread from scratch, followed by the couscous. This was all dutifully overseen by the men, who according to tradition and deeply-ingrained social custom did, well, nothing. One of our guys was selected to pour the tea, which is about the extent of the male role at mealtime and, indeed, just about any time. Meanwhile, the women were doing this: 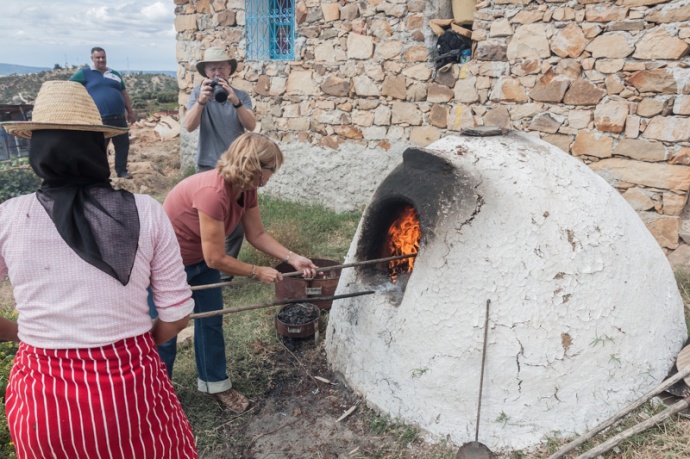 The bread-making involved a lot of patting and rolling and kneading and sifting and such (hence today’s title). In other words, we all enjoyed the benefits of rampant gender inequality. But the meal was delicious. In fact, here is a picture of one of the courses a vegetarian couscous:

We worked hard for this meal. Well, half of us did.

It is traditional to bring a small gift to the host on such a house visit. I brought along some NASA paraphernalia for this purpose: a NASA logo sew-on patch and a refrigerator magnet. Mohammad was very excited by this, and we had a pantomime conversation (he speaking no English) in which he made launching sounds and motions and was apparently asking me if I worked with rockets. I said yes. It later developed that he was actually asking me whether I was an astronaut. It was with great reluctance that I fessed up. But I still got major props:

Following the meal, Mohammed walked us around the property, down the hill to his neighbor’s scrawny marijuana patch. No, it is not legal here. No, he did not offer any to us, not even for the NASA patch.

We headed back to the riad for an hour or two break, then convened for an hour discussion with a local activist named Fatima (no, not the one from the farm), who works for an organization that is trying to modernize the situation of women in Morocco. Said situation being pretty bad at present, though not nearly so bad as in much of the Muslim world. There is in particular an enormous divide between urban and rural women (the population is about evenly split between cities and countryside): the latter are mostly uneducated, marry very young, and as I already indicated do pretty much everything to maintain the home regardless of whether her husband has a job (which a large fraction do not). The situation is changing, particularly since 2003 with the introduction of radically liberalized family laws. Women can now request a divorce (formerly solely a husband’s privilege), can require a prenup with a 50-50 property split, can demand alimony, and can have their husbands prosecuted for domestic violence. You will be unsurprised to hear that the divorce rate in Morocco has skyrocketed in the past 12 years. Fatima’s organization’s role in this liberalization process is promoting women’s education, particularly in the rural areas where at present a large fraction never go to school.

It was an interesting and animated discussion, attended by everyone in the group except one of the husbands, whom I suspect may be sleeping outdoors tonight.

We ended the day with a wonderful rooftop dinner, just Steve and Thumper and us, at a nearby restaurant recommended by our tour lead. It had the unfortunately schlocky name of “Alladin’s Magic Lamp”. But the food was excellent and we enjoyed it while overlooking the main town square during sunset, watching the nighttime town come to life and, once again, hearing the muezzins echoing from the minarets in every direction.