Lions and Tigers, Without the Tigers

After an 18-day separation (to the hour! 432 of them!), my laptop and I have been reunited. I’m a little suspicious of what mischief it might have gotten up to during two unaccounted-for nights in Paris when it was supposedly stuck in Customs, so I am scanning it for STDs and other viruses. But so far, it appears happy and healthy, so herewith is my final post from Nambia, written over two weeks ago.

We’ve now finished the final leg of our stay in Namibia, camped outside Etosha National Park in the northern part of the country. Well, “camped” is not exactly the right word: “pampered” might be a little more accurate. There are four game camps just outside the entrance to Etosha, the two best known being the more rustic Andersson’s and the snazzy one for people with more money than us called Ongava. We were booked at Andersson’s but mirabile dictu, due to an overbooking snafu we were upgraded to Ongava.

It is in many ways similar to Doro !Nawas, an open-air pseudo-rustic (but actually nicely appointed) lodge on a hillside surrounded by spacious bungalows. But the bungalows are air conditioned – no small thing in 90 F (32 C) heat with zero percent humidity. Yeah, you read that right. Towels are practically superfluous here: you air-dry in about 30 seconds after stepping out of the shower, and throughout the day you guzzle water as though your life depended on it. Which it pretty much does.

The lodge is not fenced in, and there is a manmade watering hole on the grounds where consequently a panoply of wildlife parades past us as we watch from the outdoor deck where meals are served. We can even see the watering hole from our bungalow but the view is more direct from the main lodge, and it is quite the spectacular treat to ogle the various beasts at our leisure. Leading down from the lodge is a rough path leading to a hunting blind (which they call a “hide” here), so that we can invisibly ensconce ourselves about 10 meters from the watering hole to get up close and personal (so to speak) with the animals. Our first big prize was this guy, who strolled over at about 9 PM on our first night.

This is a black rhino. There is white variety as well (actually light gray in color) that we saw two days later.

I should add that there is a slight but interesting downside to this lodge watering hole setup. Because the animals are attracted to the watering hole, and because the grounds are unfenced, it is not uncommon for visitors like rhinoceroses (rhinoceri?) to wander the grounds after sunset. We were firmly instructed not to move between the main lodge and our cabins after dark without an escort.

The landscape here is different from Damaraland. Though I would not have though it possible the air is even drier, and but for the small range of hills where our lodge sits, billiard-table flat. The surface is coarse packed dry soil and hardpan clay, the vegetation a sea of scrubby bushes, stunted acacia trees, and foot-high dry yellow grass stretching to the horizon. It is, in other words, classic arid African savanna at the end of the long dry season (and suffering a four year drought in the bargain).

In addition to this challenging landscape, there is a vast region of pure dry salt lakebed hardpan called, descriptively if unimaginatively, The Pan. It’s a white crystalline deathscape covering a suffocating 8600 sq km (3300 sq mi), about the same size as Puerto Rico. Unlike Puerto Rico, it is home to nothing but a few scrub bushes and shimmering heat mirages from horizon to horizon. It resembles the Bonneville Salt Flats, or possibly Hell.

Despite this unpromising geography, Etosha is known for its wildlife, and our first day here did not disappoint. We seem to have good wildlife karma on these trips: we seem to find the animals whose likelihood of discovery our guides hastily and mistakenly discount. In Patagonia three years ago our guide said that we should hope to spot a few condors; we stopped counting at 60. This morning a few people in our group asked if we’d find cheetahs, and our well-meaning guide attempted to manage our expectations by explaining that they were rare and hard to find, and that we should not be disappointed if we did not see any in our three days here. So of course we found a family of them in our first hour.

We spent nine hours in the bush on our longest drive, from 7 AM to 4 PM, and racked up an impressive list of finds, which we added to on subsequent days. This list is our “catch”:

That doesn’t even include the (non-ostrich) birds: secretary bird, hornbill, bustard, goshawk, hawk eagle, guinea fowl (countless of them, squawking about underfoot like their feather were on fire), and numerous others. (I am not a bird person and tend not to keep track of them in my head very well.) Not a bad haul.

The nine hour game drive was a long and thirsty stretch, marked by an interesting break in the middle in the form of a bag lunch in an unusual place. The park authorities have set up a little retail oasis in the veldt, situated next to a watering hole. It has a post office, the inevitable gift shop, rental cabins… and a shaded bleachers about 15 meters from the watering hole. So we ate our sandwiches while watching herds of zebras, springboks, and oryxes wade into the shallow water to drink and cool themselves. Not your typical lunch break.

Having described all these animals, I feel obliged to show you some of them. So here are some photos from the past three days. 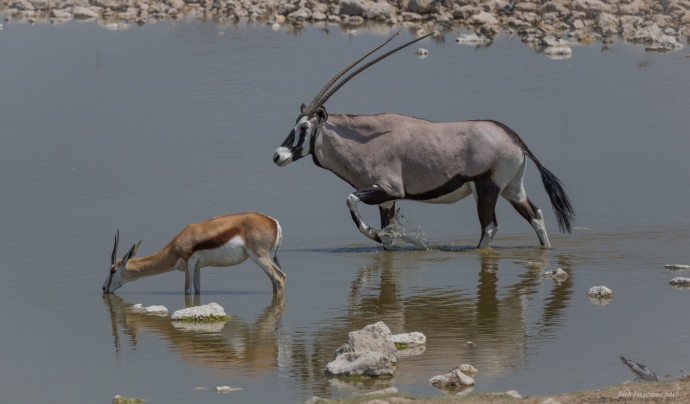 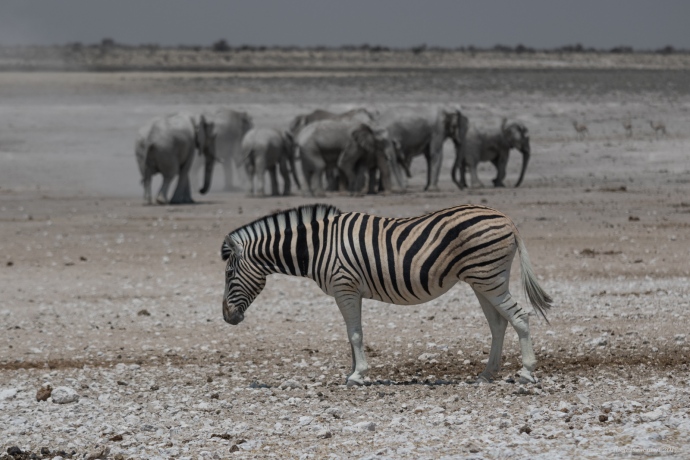 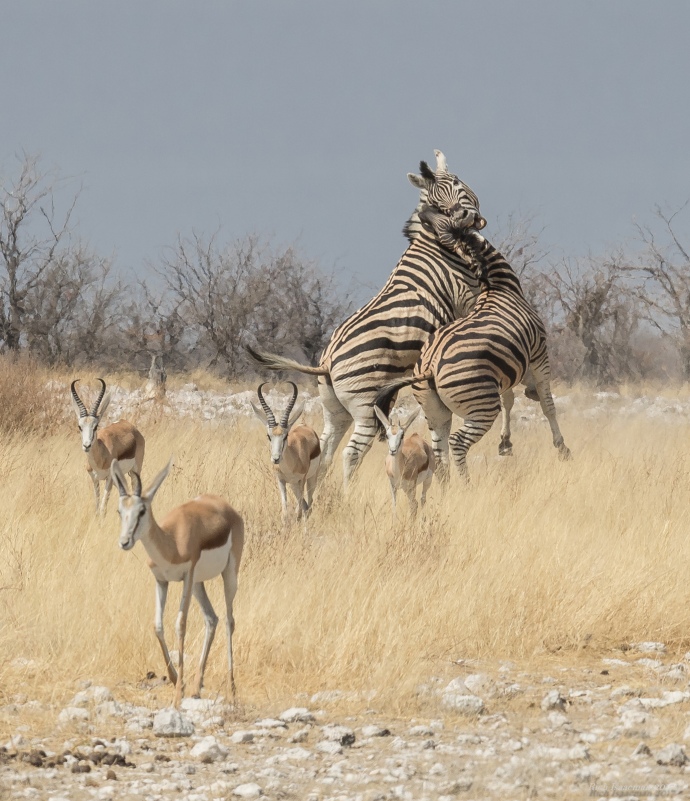 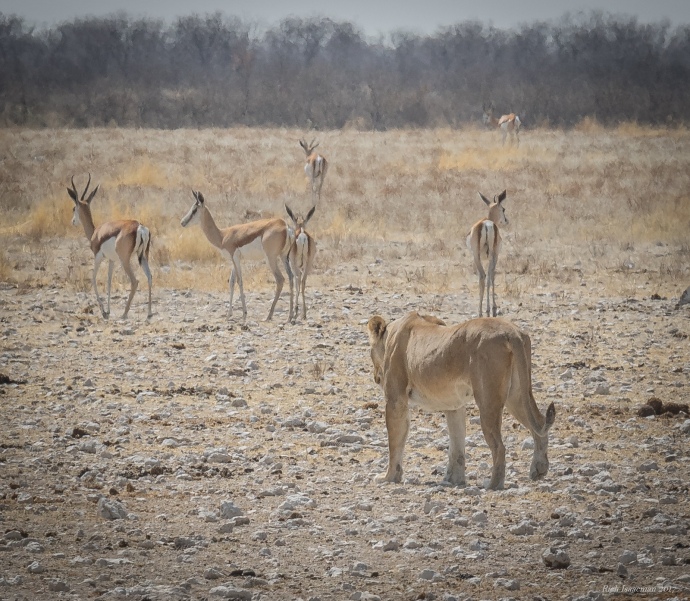 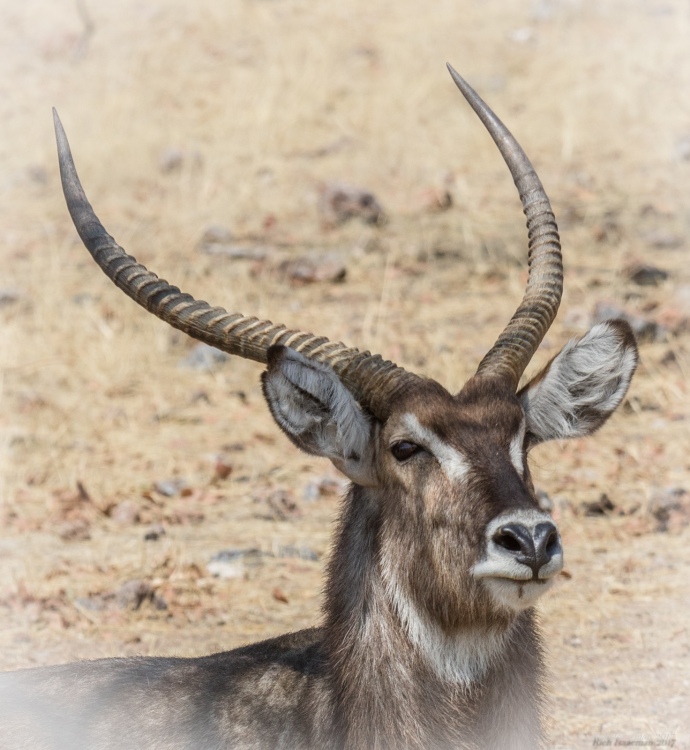 As you can see it was quite the trip, an adventure in its own right. Our enjoyment was greatly enhanced  by the congeniality of the group and the over-the-top affability of our tour lead Lloyd. His own enthusiasm really amped things up a notch. At our farewell dinner (an hour ago as I type this, but probably two days or so before I can post it from London), we thanked him with a group serenade, written by our travelmate David to go with Bob Hope’s signature melody, “Thanks for the Memories”. (You can see the original on YouTube here.) It rather nicely summarizes the past few weeks, and it would be fair to say that Lloyd was moved, despite our questionably melodic (read: “atrocious”) singing.

Thanks for the memories
For watching the sun set
For everyone we met
You helped make each experience the best that we could get
So thank you
To Lloyd!