We all know that national borders can be fluid things, influenced by political events, wars in particular. But the border between Italy and Austria is the only one that I know of that has to be recalculated on a daily basis due to climate change. Yep, it’s true. The border between the two countries is agreed to be determined by a line across the watershed, but because the glaciers are retreating the watershed is moving. This actually became an issue in September of 1991 when Ice Man Ötzi was discovered very, very close to the border, and it was not clear which country actually owned him.

A careful survey revealed that as of the time of the discovery Ötzi was on the Italian side of the border, but only barely: he’s an Italian citizen by 97 meters (318 ft). (But in a masterstroke of international diplomacy, the Italians agreed that the forensic analysis on Ötzi would be done in Innsbruck, Austria.)

Today, the border is tracked by a network of sensors and GPS receivers and is recalculated essentially continuously. If you go upstairs from Ötzi’s body in the South Tyrol Archaeological Museum you can even let a computer draw you your very own map of the border du jour that you can take home as a souvenir. Here is the drawing end of the apparatus (a Google image; photos were not allowed): 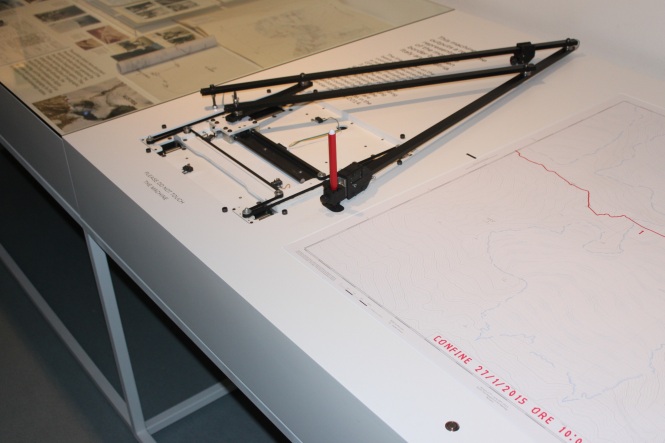 There is a pile of local topographic maps next to the table. You pick one up, lay it on the table, and as soon as the device senses that it is there it activates the drawing armature and draws that instant’s calculated border on it in a red marker, labeling it with the current date and time (which you can see at lower right).

Remember this the next time you have a property line dispute with your next door neighbor.