The first humans to reach Hawaii originated in the Marquesas Islands in about 300 AD, though the major wave of settlement didn’t happen until about a thousand years later, in 1200-1300 with settlers from Tahiti. Both of those groups of extreme canoeists paddled here across more than 2500 miles (4000 km) of open water, navigating via the stars, winds, and patterns of seabird flights, not only without stopping at a 7-11 to ask directions, but with the additional handicap of having only inferred that their destination even existed. It is a virtually incomprehensible feat.

It is said — and the evidence is indirect at best — that the original settlers first made landfall at South Point here on the Big Island. They then got down to the serious business of not dying, and taking an occasional break to carve drawings into the unforgiving lava rock. Which brings us to the petroglyphs. The Big Island is dotted with fields of carvings that look like this.

Now, this would normally be my cue to launch into a discourse about the history and meaning of the carvings, but I will spare you this for the simple reason that these things are an utter mystery: nobody knows what they mean nor even when they were carved. The particular petroglyph field that we visited yesterday — the Puako Petroglyph Archaeological Preserve on the western coast of Kohala — is one of the larger and better studied groups, but even there the official signage is reduced to saying things like “We don’t know what these things are. What do you think?”  It is believed — for what it’s worth — that the carvings were made some time between the years 1000 and 1800, which is about as unhelpful a range of dates as you can imagine. (Imagine how well it would go over on a high school history test when you pointed out that a particular event took place somewhere between the Norman Conquest and the French Revolution.)

One of the few things that one can state with confidence is that most — but not all — of the drawings are human figures. (And no, they do not look like aliens.) It’s all a little bit spooky.

At the Puako petroglyph preserve, the spookiness is amplified by the setting, which is on a lava flow that one emerges onto after a short hike through what feels like some kind of haunted forest, along a rough path through groves of stunted and twisted trees.

At the end of the wooded path is the petroglyph field, a lava flow about the size of a couple of tennis courts, limned with burnt-looking trees. Virtually every square foot of it has a carving. You can see a couple of them clearly in the photo below, but in fact there are hundreds if not thousands.

It makes for an interesting if head-scratching outing. It’s hard not to wonder what these things are all about.

We had had a more conventional sightseeing experience a couple of days earlier on an outing to the Hamakua coast, the northeastern coast of the island that stretches between Hilo and the Kohala peninsula. It was a rainy day on that part of the island but we made the best of it, starting with a pilgrimage to the deservedly best-known purveyor of malasadas on the island, the Tex Drive In. Simply put, if you have not eaten malasadas from Tex, you have not truly visited the Big Island.

When I lived here in the early 1980’s, Tex Drive In was a little shack by the side of the road in the town of Honokaa. They sold malasadas and nothing else, and it is trite but true to say that people came from miles around to buy them. They prospered, and I was simultaneously pleased and disconcerted on this trip to discover that they are no longer in a little shack, though they are still by the side of the road in Honokaa. But the little shack has morphed into a grown-up building complete with a lunch menu and a gift shop. It feels a little like lost innocence but the good news is that the malasadas are still absolutely killer and cost only $1.10 each. So it’s hard to begrudge then their success.

Our touring ambitions were tempered by the downpour but we did make it to Akaka Falls, a 442 ft (135 m) cataract that is one of the highest and most beautiful on the island. 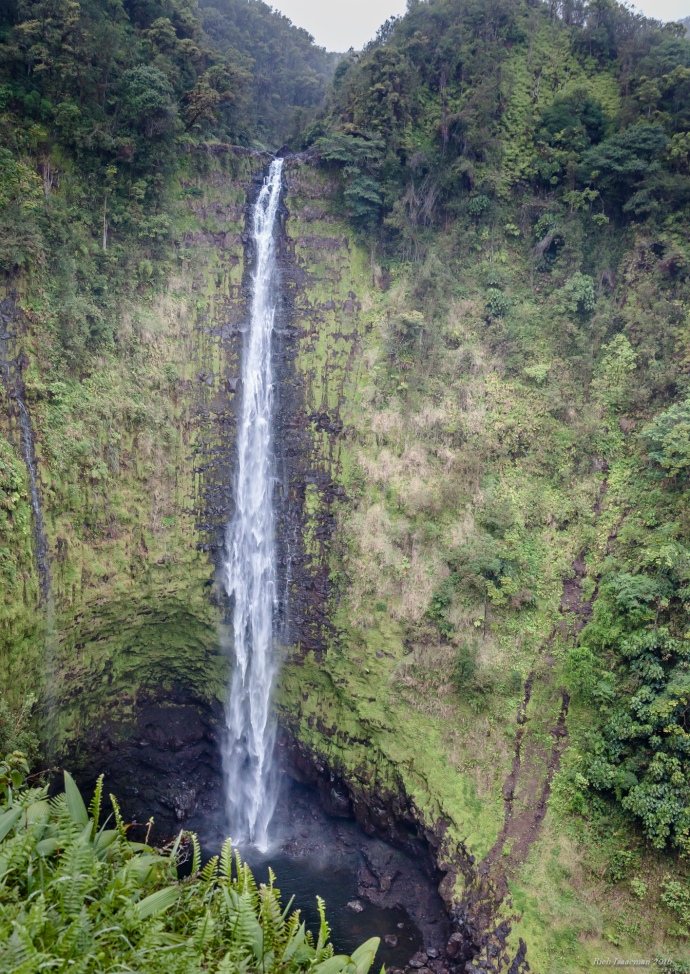 You reach it after traversing an easy paved walk along a rainforest trail — and on this particular day the emphasis was on the “rain” — whose ferns and banyans set the stage for your eventual view of the falls. 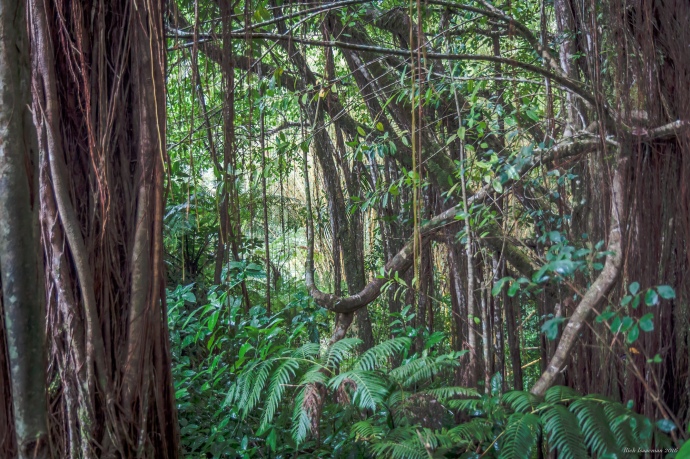 It’s always been one of my favorite sights on the island; back when I lived here, one of my favorite things to do was rent a small plane and fly out to the falls, just flying tight circles above it so I could admire them from above. Now you can do that at really close range: there’s some kind of zipline tour that takes you quite close to them, and Alice is agitating to do exactly that some time in the next week or so if we can find a day when it is not raining there.

Alice vows to return to Akaka Falls via zipline