Sons at the Beach

For about the past 30 years, my family has enjoyed a reunion week at the beach. The gathering has near-religious significance; we didn’t even miss the year my father died. It’s very gratifying to watch the family grow over the years — we’re up to four generations now — and since this year is Alice’s and my 20th wedding anniversary we splurged on a more elaborate setting, an 11-bedroom house right on the dunes at Virginia Beach. Here is our temporary Gatsby-esque mansion: 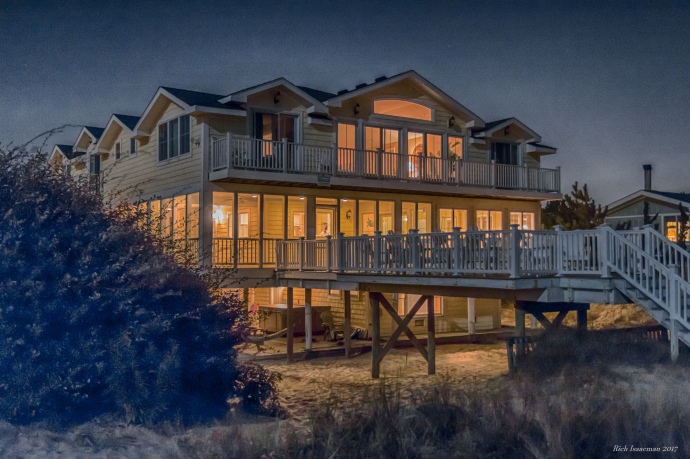 How did this whole vacation-at-the-beach thing start, anyway? (I mean the whole cultural concept, not just my family.) Turns out it’s mostly a phenomenon of the past couple of hundred years. Although there are records of elite ancient Romans taking the waters at the coast, the historical reputation of the ocean was traditionally a little dark and intimidating: mariners lost at sea, biblical Jonah-eating whales, and so forth.  Plus, for most of recorded history, outside of Polynesia the hoi polloi were too busy starving and/or dying of the pestilence du jour to do a lot of vacation planning or practice body surfing.

But when it comes to not fearing the sea, it’s hard to beat the Dutch — they’ve basically fought it to a standstill for the last several centuries — and it was Dutch landscape artists of the early 17th century whose pastoral seaside imagery started establishing the beach as an attractive place to visit.

Things really stated rolling in 1778 when French nobleman and chemist Antoine Lavoisier discovered oxygen. Yes, really. Assorted hucksters and promoters of the day seized on the discovery: oxygen is good for you! And the sea air has more and better oxygen than whatever hovel you’re occupying at home, so come to the beach! Oddly enough, there was some truth to this, the Industrial Revolution having recently taken hold, and the air quality in cities like London ranking somewhere between “toxic” and “carbonaceous solid”.

So here we are. Virginia Beach is officially the largest city in Virginia, with a population of about a half a million, but it has grown largely by accretion, having absorbed a number smaller seaside suburbs. There is a downtown resort area with a big boardwalk, but we are a little farther down the coast in an area called Sandbridge, on the northern end of an enormous barrier island that extends southward for roughly 150 miles (250 km) down through North Carolina’s Outer Banks.  The Guinness people cite it as the longest pleasure beach on the planet.

Barrier islands, as you probably know, are threatened by the rising oceans, “threatened” in this case being the reassuring first cousin of the more accurate “doomed”. They are designed by nature to be ephemeral: sand and silt accumulate on the inland side as the ocean washes away the shoreline, causing them to migrate inland and merge with the mainland as the tide creates replacement islands further out to sea. Beach houses are not so mobile, however, so every property owner is fighting what must ultimately be a losing battle against flooding.

A related problem, of course, are storms. Virginia Beach is extremely lucky in that regard, being generally far enough north to be mostly out of reach of the tropical-forming hurricanes, and too far south to be touched by northern storms. So it is in a meteorological “Goldilocks zone”, being jusssst in the right place to perpetually avoid being blown away. (The rising seas will still get it in the end, though.)

Our weather this week has been mostly good, if a little windy on the beach. That can be good news if you’re flying a suitably heavy kite.

We’ve also had one or two ominous looking days, which if nothing else make for nice dramatic photos… black and white of course. 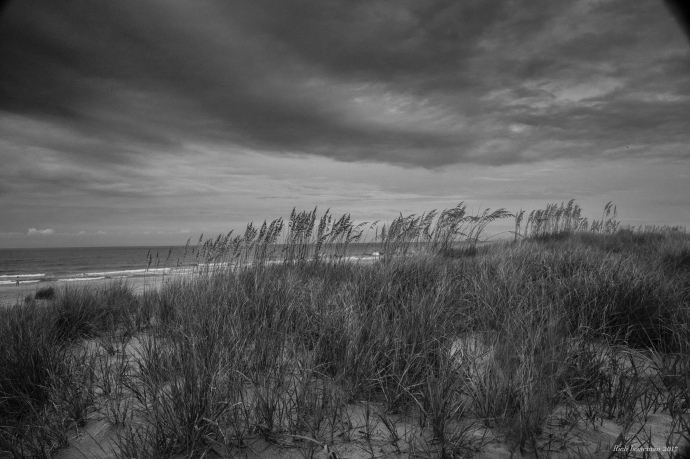