In less than a week we embark on an itinerary that one could fairly call “eclectic”, even by our peripatetic standards: 10 days in Iceland, followed by 4 days each in Paris in Prague. Why those choices? We’ve been to Paris many times and love it; it’s been 8 years since we were last there, and we felt it was time to go back. Prague has been on our bucket list for some time; we know many people who have visited and come back raving around it. And Iceland seems to have gotten very trendy in the past few years, with hordes of visitors descending upon the little island, so we figured it was time to do our part. Here’s our route, just south of the Arctic Circle: 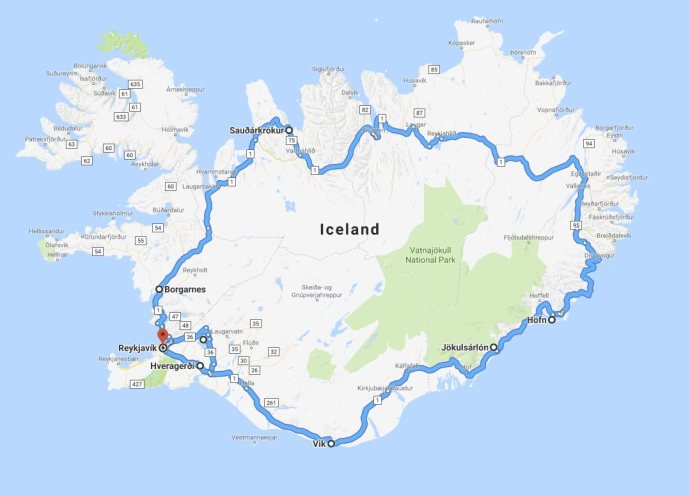 To give you an ideal of the scale, the island is roughly 400 km across; our driving route, the aptly-named Ring Road (marked in blue) is about 900 miles (1500 km) long. You’d think that 10 days would be more than enough time to cover that distance, but it’ll be tight: a lot of the route is slow going, and of course there is a lot to see along the way. These include geysers, glaciers, waterfalls, volcanic landscapes, glaciers, waterfalls, volcanic landscapes, glaciers, and waterfalls. And geysers.

Some fun facts about Iceland:

At an average latitude of 65° — just a hair south of the Arctic Circle — Iceland is not famed for its clement weather. And of course at that latitude, you are stuck in more or less endless night in midwinter, and get to enjoy 24-hour daylight in midsummer. But we’ll be there in September, not far off the equinox, and so neither the temperatures nor the length of the day will be particularly extreme: sunrise will be at about 6:30 AM and sunset around 8:15 PM. The daytime high temperatures will be  about 50° F (11° C), the nights several degrees cooler.

What will be cold is the water, at a cryonic 36° F (2° C). The reason this matters is that we have booked a snorkeling trip (!) at Silfra, a volcanic fissure that is essentially the boundary between the two tectonic continental plates that Iceland straddles. (Hence all the volcanoes and geysers.) It is known for its stunningly clear water, volcanic rock formations, and hypothermic tourists. I’ll report on this when it happens.

Finally, we are of course hoping to see the aurora borealis. This is definitely a crapshoot; we’re at the early end of the season for it, and as of this moment the weather forecast calls for a lot of clouds and rain, at least for the first half of the trip.. But perhaps we will get lucky.

So wish us luck, watch this space, and remember this traditional greeting: “Þjónn, ég pantaði gerjað hákarl en þetta eru hrútur“, which according to Google means, “Waiter, I ordered fermented shark but these are ram testicles.”